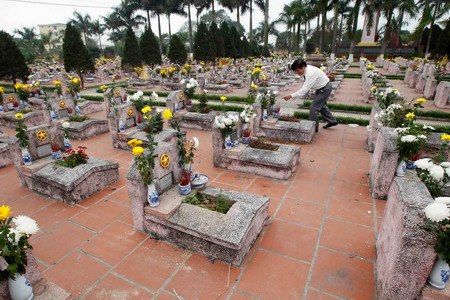 Soldiers and others who died in the war against the invading Chinese army in 1979 deserve to be honored and commemorated, veterans, historians and former diplomat say

Vietnamese veteran Khang Phan lays flowers at the graves of his comrades who died during the border war between China and Vietnam, at a military cemetery outside Hanoi February 17

Tourists visiting Dong Dang Town in the northern mountainous province of Lang Son can count their lucky stars if they get Hoang Van Thao as their driver.

Thao is no ordinary driver. He is one of those brave soldiers who fought against the invading Chinese army four years after the end of the Vietnam War against the Americans.

On February 17, 1979, more than 600,000 Chinese troops crossed Vietnam’s northern border to invade the country, launching a 17-day war along the 600-kilometer border that the two nations share.

On February 17, 2013, on the 34th anniversary of this war, Thao took a group of tourists from Hanoi to visit several destinations in Dong Dang, sites where the Tay Son Regiment he belonged to fought the invaders.

After the war, Thao became a driver for a Hanoi-based tourism agency.

“My comrades have opened sidewalk cafés and drive tricycles to carry goods. All of us lead a difficult life but we are luckier than many others who fell down forever near the border,” the Tuoi Tre (Youth) newspaper quoted Thao as saying.

Thao and other veterans of the 1979 war have never failed to observe the death anniversaries of their martyred comrades. They also donate money to families of the martyrs and soldiers who were wounded in the conflict.

Thao is also among the few people who are still talking about the defensive war Vietnam was forced to fight against China.

“I have taken every opportunity to tell younger generations about the war.

“Vietnamese citizens born before 1970 all know about the war but not many people talk about it nowadays,” he said.

In Vietnam, it is indeed odd that a conflict that claimed thousands of lives on both sides is not mentioned much or remembered or spotlighted with the same importance as other wars that Vietnam has been forced to fight against the French and Americans.

Thao’s concerns about the conflicts in which he lost many comrades are shared by several experts who want the historical event brought into national consciousness, taught in school and duly commemorated.

They argue that such commemorations gain further importance in the context of increasing tensions over the East Sea (internationally known as the South China Sea), triggered primarily by China’s aggressive, illegal moves to claim ownership of more than 80 percent of the area against established international conventions.

Although the northern border war ended in March 1979, it was followed by border tensions between the two countries throughout the following decade.

The two countries normalized diplomatic relations in 1991. In 1999, leaders of both nations agreed on the “16-golden-word motto” that would guide relations between the two countries: “long-term stability and future orientation, friendly neighborhood, comprehensive cooperation.”

In 2000, the then Chinese Party Chief Jiang Jemin explained: “‘Long term stability’ means that Viet-Sino friendship fits both countries’ fundamental interests, so in any circumstance at any time it’s a must to maintain a stable and healthy development of the relationship; ‘Looking forward’ means taking the standpoint of NOW to look for the long term and open a better future for Viet-Sino relationship.” 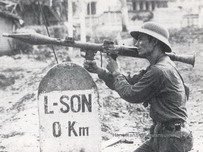 A Vietnamese soldier prepares to fire a rocket launcher in the battlefield against the invading Chinese army in 1979. Veterans, historians and others are urging the Vietnamese government to take more actions to commemorate soldiers and others who were killed in the war in 1979.

However, Major-General Le Van Cuong, former director of the Strategy Institute under the Ministry of Public Security, says it is necessary to review the situation regarding commemoration of this war.

“On special occasions like the tenth, fifteenth or the recent 30th anniversary of the war against the Chinese invaders (2009), most local newspapers and televisions have not reported on the event. It is a major shortcoming of the government,” he told Vietweek.

“Moreover, it is an insult to the souls of the compatriots and soldiers who lost their lives to protect the country in the war in February 1979…”

Cuong wondered what the families of the deceased would think about such silence.

“It is said that talking about it [the war] will ignite nationalism. I would say that it is quibbling,” he said.

He said there should be more activities to highlight the actual facts of the war to help people the world over understand what really happened.

“While we remain silent, we have totaled up an average of 600-800 reports on Chinese media about what they call the defensive war against Vietnam on each anniversary,” he said, citing an unnamed source as saying that more than 90 percent of Chinese citizens mistakenly believed that Vietnamese army had crossed the border to invade China in 1979.

It is necessary to make “more than 1.3 billion Chinese understand the truth that on that day, more than 600,000 Chinese troops crossed the border to invade Vietnam.”

Cuong said it is the government’s responsibility to include the war in textbooks.

“A majority of students do not know about this war. It will be the government’s responsibility if this situation lasts longer.

“We will surely be criticized by future generations. Thousands of people have lost their lives to protect the land in the north. Why do we have no words for them? It’s late and can’t be later. In my opinion, the government has to include this in the history of resistance against invasions.

“We cannot have a vague view or ignore this historic issue,” he said.

In a recent interview with BBC, Vietnam’s ambassador to China between 1974 and 1987, Nguyen Trong Vinh, also said Vietnam should have commemorated the deaths of soldiers and other people in the war.

“It is really strange. The government should have done this [commemorating the deceased] over the past years,” he said.

Ha said the war was a result of China and the former Soviet Union jostling for “strategic benefits” on the global stage.

He said 40 days after Vietnam helped Cambodia liberate Phnom Penh from the genocidal Pol Pot regime on January 7, 1979, China began its invasion, announcing that it would teach Vietnam a lesson.

“We have found foreign consultants who backed the Pol Pot regime. Many of them used to help Vietnam in the Vietnam War.

“The people and soldiers of Vietnam were forced to take up guns again and they forced the Chinese army away along the 600 kilometer borderline,” Ha said.

Ha said as a historian and a soldier, he considered peace “the most precious thing in all situations.”

He said it was only after the wars ended that Vietnam could reform and take long term steps and sustainable policies for economic development, thus stabilizing people’s lives and improving the country’s diplomatic position.

“However, it doesn’t mean that a historical page is closed. The nature of history is fair and objective. And what actually happened will be discussed again sometime.

“We need to be respectful and grateful to the martyrs who died in the defensive war.” 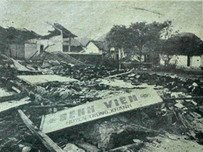 On February 17, veteran Nguyen Van Duyen took his daughter to burn incense and offer flowers to his brothers-in-arms at the Duyen Hai Cemetery in Lao Cai Province.

“They are my comrades in the Ba Chua Duyen Hai paramilitary regiment. We blocked the enemy from crossing the Red River to invade Lao Cai Town. They fought and died during the first hours in the fight.

“I still remember 19-year-old Nguyen Van Hung who killed more than ten enemies armed with just a gun and several grenades. He died in the trench after firing his final bullets,” he said.

Hai Trieu, a researcher at the Vietnam People’s Army Publishing House, said he has been “quietly” collecting documents about Vietnamese soldiers in the 1979 war.

“No war to protect the country is forgotten,” he said.

In February 2009, the 30th anniversary of the war, Duong Danh Dy, first secretary of the Vietnamese embassy in China in 1979, wrote that Vietnam’s reticence on the war was made in a greater cause (of amity between the neighboring nations).

“It’s not because we were not on the right side, and not because the Vietnamese people are scared or quick to forget.” 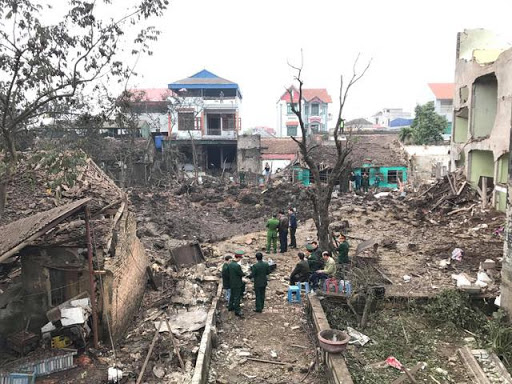 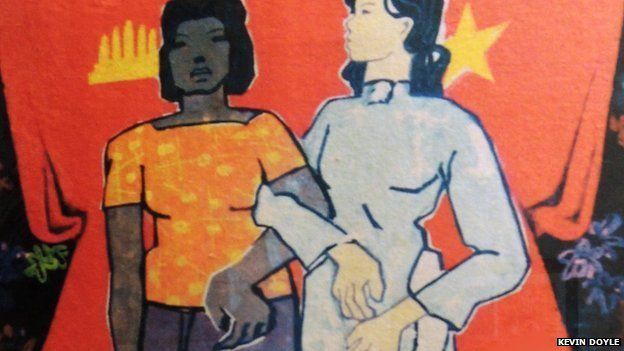 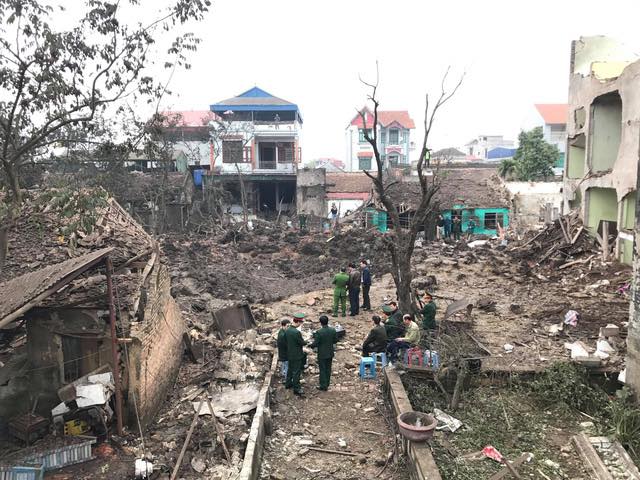